Todd Fyffe, Superintendent at Westmoreland Country Club in Wilmette, IL, has overseen the completion of the new drainage system that is designed to store flood waters when they back up on the property.

“I am impressed with the ability of the course to soak up a one inch rain and the short period of time the soil remains saturated. In the past, we would have remained saturated for days after a one inch rain, and for weeks after multiple rain events.  The fairways  are now open to cart traffic the next day following a one-inch rain.”

The healing process has been impressive. Leibold Irrigation did a great job. They used the commercial sod harvester supplied by Turf Drainage Co of America. There is little or no visibility to the trench lines, even within 90 days after the completion of the work.

The Club hired Dennis Hurley of Turf Drainage Co. of America to work, in combination with Steve Berecz of Gewalt Hamilton Associates Engineering. Leibold Irrigation Inc. was contracted to install the drainage plan, and completed the last of the work in December 2013. 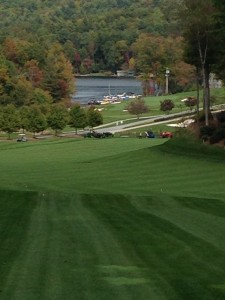 Lake Toxaway Country Club sits on as pretty of a piece of land as any course in the country. The golf course was renovated by Kris Spence, and has received rave reviews for their new design. However, the heavy rains this summer in North Carolina have brought on-going drainage issues back into focus.

In 2010, the club hired Dennis Hurley of Turf Drainage Co. of America to do a drainage plan on the most problematic holes. During the summer, the club hired a new superintendent, Mike Smith, to replace retiring superintendent Steve Turner. Mike’s start date was within a week of the start of the drainage project. Being thrown into the mix of a new project is never easy, but Mike adapted well, and the project is 50% complete entering the winter break. The project will start again during the first week of February 2014, and should be completed by April 1st.

The drainage project showed immediate results on the 18th hole, which had traditionally been the wettest area of the course. The TDA Master plan was implemented by Turf Drainage Co. of Florida. The installation of a 7 foot deep siphon has taken massive amounts of water from the fairway, which was bleeding from a nearby stream. 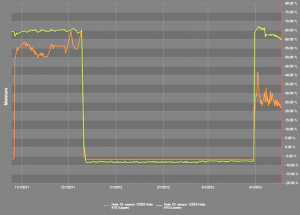 Like most clubs, Burning Tree Country Club picked their most difficult drainage problem to test the drainage methods proposed by Turf Drainage Co. of America in a Master Plan that was completed in 2010.

Mike Barton, golf course superintendent, convinced the club to install the proposed plan on their 10th hole in 2011. Bob Defruscio, project chairman, relayed that long time members told him prior to the start of the project that they didn’t mind spending the money that he requested, but it was a waste of time because the club had been trying to drain that hole for 40 years. One year later the membership approved phase II with a 94% approval from the membership.

The work on Phase II started in mid-October, and involves holes 4, 5, 6, 7 and 8. The project is currently shut down for the winter, but as of the Christmas break, was ahead of schedule and under budget. This phase involves adding significant pumping capacity to the front nine, but most important, will involve the same deep drainage trenches (up to four feet deep) that roved so successful on the difficult to drain 10th hole.

Number 10 went from the worst drained hole to one of our best.”