Ralph Kepple ,CGCS at East Lake Golf Club, talks about the amazing performance of the drainage system during the 2009 Tour Championship. The city of Atlanta experienced severe flooding in the week prior to the tournament, and East Lake Golf Club received over 12″ of rain. Ralph details how, in the face of these conditions, not only was The Tour able to play the ball down all four days of the tournament, he only had to skip mowing for one day!

Ralph was nominated for TurfNet’s Superintendent of the Year in 2007, and has been at East Lake since 1992. He has been involved in a major renovation by Rees Jones in 1994, a greens conversion, and bunker renovation in 2008, including numerous other renovation projects to the historic golf course where Bobby Jones learned to play the game. When certified golf course superintendent Larry Johnson was fighting soft and soggy conditions on two of his cool season greens in Sacramento, California, he chose Turf Drainage Co. of America to solve his problem. Larry was familiar with TDA through the extensive work previously performed in his fairways, so he felt confident with proceeding to drain his two worst greens.

The installation contractor, Turf Drainage Co. of the West, mobilized a crew out of the Bay Area, and completed the installation on both of the greens in less than one week. Following the standards and methods TDA has established for greens’ installations, the turf was playable the day after the work was completed. Prior to commencing any excavation, each trench has the sod removed. Every individual piece of sod is labeled so that it is replaced in the exact spot from which it came. The trenching then proceeds using the Tarp System developed by TDA, which allows for the clean removal of spoils without any damage to the putting surface. Trenches are always spaced uniformly across the slope to allow for the most efficient collection of seepage water.

Larry elected to continue the trenching down and across the approaches to provide his membership the opportunity to play into the green with bump and run shots.

Tech Section:
Concentrations of Flow can be your enemy or your friend

The principal of Concentrations of Flow appears in many aspects of drainage. Understanding it is critical to proper drainage design. It simply states that as water moves from larger areas through smaller areas, flow rates increase.

We see this every day on our golf courses when water runs off of hillsides. Not only is the bottom of the slope the wettest, but areas that run between mounds or valleys where the flow travels will be the wettest. These areas have to handle not only the water that is falling on the flow area, but the water that has fallen on the watershed above it. If we don’t collect this water before it concentrates in these areas, the heavy Concentrations of Flow will inundate an area to a point where it cannot be mowed. However, if we recognize these areas as opportunities to collect the water in the most concentrated part of the stream, we can become highly efficient with our placement of basins. In the picture above, the placement of a basin in the narrow areas of flow allows us to collect large amounts of water inexpensively before it saturates the area around the basin at the bottom of the collection area. Thus, the objective here is to reduce the Concentrations of Flow by placing surface inlets higher in the stream’s elevation. In the next picture, we have water running across a cart path in a sheet. In this case, we want to increase the Concentrations of Flow by placing curbing in combination with an inlet. Recognizing Concentrations of Flow during the planning of your drainage projects will allow you to collect the largest amounts of water for the least number of dollars.

The Farm Golf Club in Dalton, GA sits on one of the most spectacular properties anywhere. The Farm was designed by Tom Fazio in 1988, and hosted the US Senior Amateur in 2005. Trey Cutshall worked with Dennis Hurley from TDA on a Master Drainage Plan that details every area that affects playability or maintenance. Once the planning was completed, the club quickly began the construction phase which will last approximately 6 months. The weather has been tough during the first month, dumping over 6 inches of rain and 3″ of snow on the contractor, Siphon Systems, Inc. Work on the 11th hole of the Ocean Course at The Olympic Club in San Francisco started in November, but winter rains halted the project. The work will resume once the weather improves in the spring. The 11th is a picturesque uphill par 5 with plenty of surface slope, but has been plagued with a wet fairway caused by poor seepage drainage. TDA designed a system of surface and seepage collection to tie into an existing large pipe, which was installed by Pat Finlen’s staff. Turf Drainage Co. of the West, LLC, is the contractor for the project, just as it has been for drainage installations on the 6th and 7th holes of the Ocean Course. 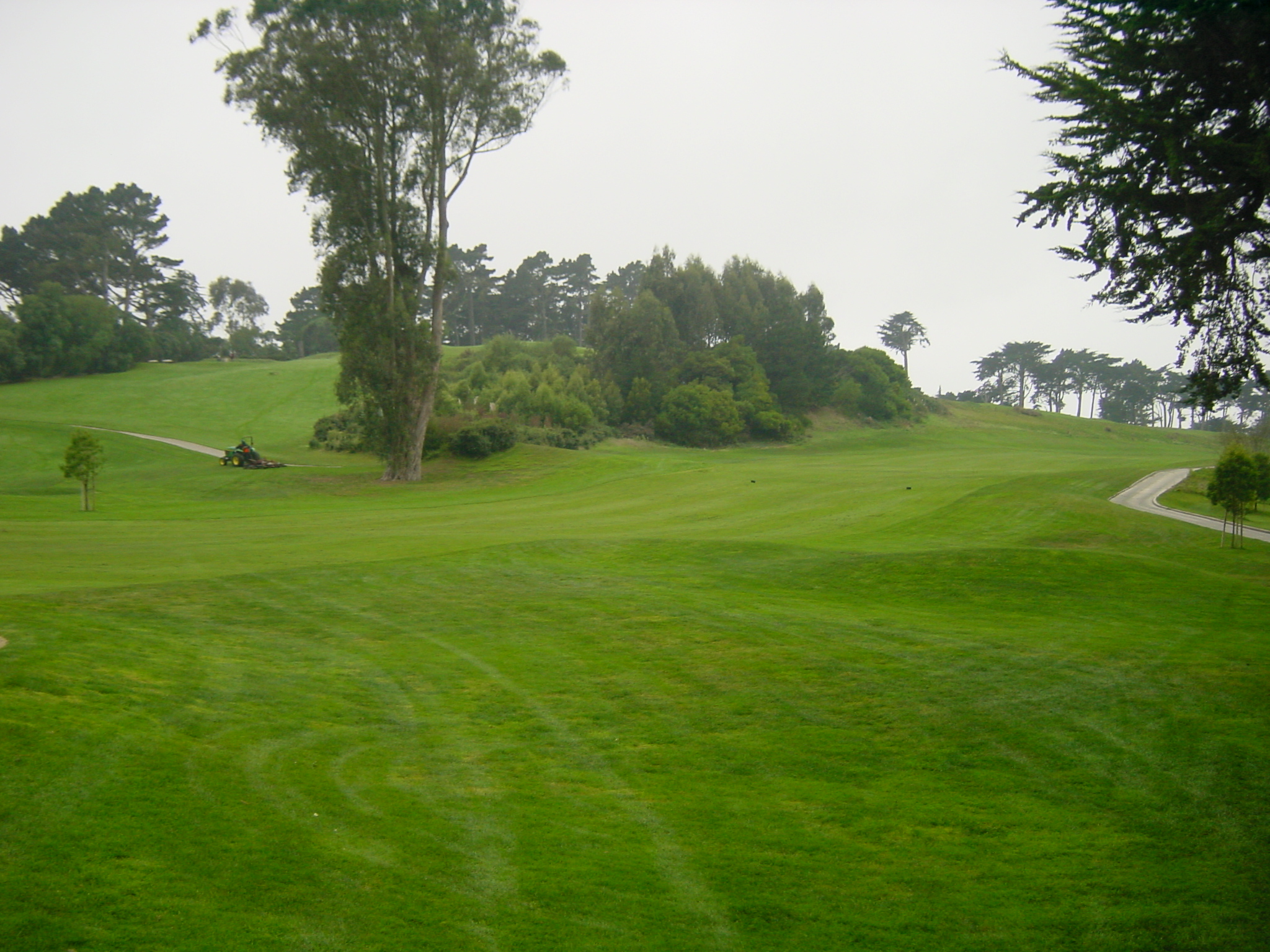