A master drainage plan can give you, the superintendent, a way to clearly present the status of your drainage problem to your committee or owner. Pat O’Brien wrote an article in the September, 2005 issue of the USGA Greens Section Record regarding the importance of starting a drainage project with a plan. 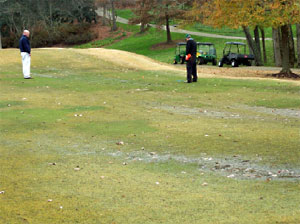 Trey Cutshall, Superintendent at The Farm Golf Club, says “Until we did the drainage plan with TDA, we didn’t have a real grasp on the scope of the project. By being involved during the planning process, I knew that the areas that I felt were important were being included, and I had a much better understanding of what the options were in each area. Once we did the plan, it was much easier for me to communicate to our owner and members what they should expect from the project. It also allowed us to see exactly how much the budget would change if lower priority areas were removed during the construction process. The time and money we spent planning the project was paid back many times.”

Trey continues, “The most important thing it did for us was that it helped the owner and me realize that the project required the involvement of a contractor. Prior to the plan, we considered an in-house project. Once the plan was completed and I saw the projected man hours that would be required, it was obvious that we didn’t have anywhere near enough labor or equipment in our operation to produce the results we wanted.”

The costs of the plans are less than most people expect. 18 Hole Master Plans typically run $10,000 to $12,000 and take 2 to 3 days. One day plans are less expensive and can be done when only a few holes are an issue. Do your club a favor. Get a Master Plan on all of the drainage work needed on your course in the future. This plan can be followed for years as it is implemented in phases.