Visiting courses all over the country, we observe two common mistakes installing drainage that can actually cause your drainage problem to worsen as opposed to improve. The first is installing perforated pipe and gravel to an area where there is no control over the relief.  This could be a lake or a river that fluctuates during rain events, or a tidal area that inundates the system on high tide. 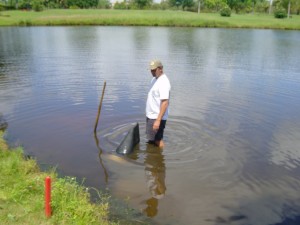 In either case, a perforated pipe and gravel system immediately starts to function as a leach field instead of a drainage system. In a situation such as this, as the water level at the relief rises and fills the pipe with water, the water seeps out into the gravel bed and saturates the profile.

Giving the water the access to the full length of the wetted perimeter exposes much more of the soil profile to saturation than would occur if the system was not in the ground. Once saturated, the water has to be removed, along with the water that saturated the profile from the rainfall. It would have been much better if the system had never been installed.

Once saturated, the water has to be removed, along with the water that saturated the profile from the rainfall. It would have been much better if the system had never been installed…”

There are two possible solutions to this problem. The first is the use of a check valve. The check valve will close when the water at the relief is higher that the water inside the system. Even though the system won’t drain at this point, it prevents the excess saturation. TDA sells many different types of check valves, and has a patent pending on a new computerized check valve for large diameter pipe. 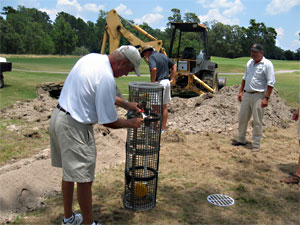 The second, and ultimate solution for these types of situations, is to use a check valve in combination with a pump. This system not only prevents the saturation of the profile from the rising relief, but can be designed where the area can be drained even while the water at the relief is above its resting level.

These types of systems can be used on small scale, as we do on golf courses, or on a large scale, as New Orleans does. It is a system based on this principle that allows our office to sit at an elevation of 3 feet below sea level (works pretty good most of the time).

Next quarter we will talk about the problems created when perforated pipe is used as transportation pipe.