Wade Hampton Can Hold Its Water 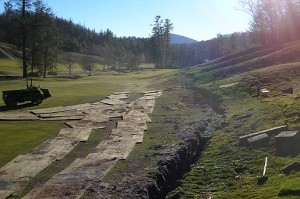 Deep hillside drains were constructed to keep water from the nearby mountain from seeping onto the Wade Hampton Golf Club. The area annually receives between 80 and 100 inches of rain. (Courtesy Tom Bailey/Wade Hampton G.C.)
By David Shefter, USGA
September 23, 2013

CASHIERS, N.C. – During the first round of stroke-play qualifying at the 59th USGA Senior Amateur, 1¾ inches of rain fell on Wade Hampton Golf Club. By the time play was suspended at 2:38 p.m. EDT for unplayable conditions, the miniature rivers streamed down several fairways.Seventeen hours later when the first round resumed, the course looked pristine again. Carts were even permitted on the fairways.

Had this occurred a decade ago, it’s likely the championship might not have continued the following morning.  But thanks to a $1.7 million renovation of Wade Hampton’s drainage system, a project that took four years to complete, heavy rain is no longer a knockout blow for the Tom Fazio layout.

Tom Bailey, the director of golf course operations, was the man responsible for the extensive overhaul. When the 38-year-old Virginia Tech graduate arrived in December of 2003 from Oak Hill Country Club in Rochester, N.Y., he outlined a long-range maintenance plan for Wade Hampton. The first thing he noticed was how poorly the course drained.Built in a valley and a county (Jackson) that receives between 80 and 100 inches of annual precipitation, Wade Hampton sits in a sub-tropical rain forest. Moisture from the Gulf of Mexico comes up from the south and when it reaches the mountains of western Carolina, the highest point in this region, it dumps lots of rain.

That water needs a place to go and the original drainage system that was installed at Wade Hampton couldn’t handle the excess moisture.

So Bailey contacted drainage experit Dennis Hurley  to come up with a master plan for Wade Hampton.

“He’s one of the best in the world,” said Pat O’Brien, the USGA’s Green Section director for the southeast region who has made several visits to Wade Hampton over the years. “[Dennis] will come on site initially and will take several days to analyze [every] hole. He comes up with a drainage design.”

The result was Hurley’s largest project to date. A total of 25 miles of pipe, installed 2 to 3 feet below the surface, was used to completely overhaul Wade Hampton’s drainage system. Bailey’s team, along with outside help from Siphon Systems, a Florida-based company that specializes in trenching and the installation of the pipes, began with the first and fifth holes.

Once the membership saw the difference the new drainage system had on the course, they immediately pushed forward with the project.

“They were our wettest holes,” said Bailey of No.1 and No. 5. “It didn’t take a whole lot of convincing after that.”

Not only did this project improve the surface drainage from the rain that falls on the course, it also captured stormwater runoff from the nearby mountain. Now the water that flows down from the mountain never reaches the golf course.

The work wasn’t limited to pipe installation. On the 18th hole, Bailey’s team completely stripped the bentgrass and Poa annua and moved it between the ninth and 18th holes. His team then raised the left side of the fairway 2 feet and reduced the right-to-left grade from 6 to 3 percent.

“We brought the grass back down because it had a tendency to flood from the [adjacent] creek,” said Bailey. “We forced the water into the marshland on the left side of the fairway.”

On the fifth hole, Bailey and his team noticed there was no relief for the water, so they installed a sump pump to transfer the water to a creek and ditch along the nearby highway.

Because Wade Hampton is closed for the winter, this extensive project was completed without causing major disruption to regular member play. The construction on Nos. 2 and 4 was completed in three weeks, from Nov. 1 to just before Thanksgiving, to allow members to play over the holiday weekend.

“That’s why we kept 20 guys around,” said Bailey, who has a staff of 35 during the season and 12 who work during the winter months. “That was the fastest they had ever put it in.”

Bailey, who served as the superintendent of both the East and West courses at Oak Hill under Paul Latshaw, is quite pleased with how this drainage project at Wade Hampton turned out. And he’s especially happy that Saturday’s rain didn’t have too much of an adverse effect on the Senior Amateur.

Players lauded the playability of the course a day after the storm.

“The course was gorgeous,” said Doug Hanzel, the low amateur at the 2012 and 2013 U.S. Senior Opens. “The fairways weren’t all that wet, they are perfect.”

Those comments certainly will make any superintendent blush, but Bailey is proud of the way Wade Hampton can now handle excess precipitation.

“We would be having a hard time,” said Bailey when asked if the old drainage system could have handled the storm. “We would be on the [cart] paths for weeks. You could play, but it would be squishy wet. But we have no problems.”

David Shefter is a senior staff writer with the USGA. Email him at dshefter@usga.org.