Not a month goes by at TDA that we don’t talk with a golf course that has incurred major damage to their existing drainage system as the result of having had an irrigation system installed with a vibratory plow. The reasoning is always the same. “The cost difference to trench it in wasn’t worth it. Besides, the contractor told me that they do it all of the time and it isn’t a problem.”

Cutting a drainage line while installing an irrigation system isn’t like cutting an irrigation line when you install drainage. You may not know a drainage line has been cut for several seasons. Even rains right after the irrigation project is completed might not tell you all of the damage that has been done. Many times the system will still work at a reduced efficiency for several rainstorms until contaminated soil enters the damaged part of the line and finally clogs the system to the point that it is no longer serviceable. By that time, the irrigation contractor may be long gone and all of the warranties are expired. 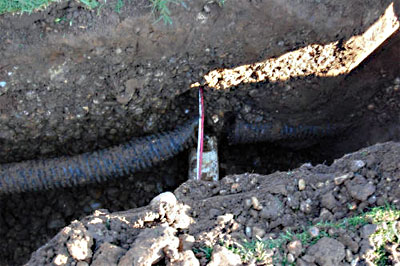 Are we saying, “don’t ever install an irrigation system with a vibratory plow?” “No.” What we are saying is, communicate during the bid process what will be expected of the contractor, so that he can properly bid the project, and be prepared to have someone on your staff inspect all areas.

Feel free to call us here at TDA. We will be glad to discuss the problems we have seen over the years with these installations, and the things you can do to make sure your project is installed successfully without surprises down the road.