There has always been a lot of misunderstanding about where The Turf Drain Siphon System has applications. We are often asked if it works by “wicking” water off of the soil. The answer is no.

The Turf Drain Siphon System is a transportation system, not a collection system. In a later newsletter, we will discuss where and when it has advantages over other transportation systems. However, the purpose of this article is to clear up the notion that any drainage system can “wick” water. There are various claims by manufacturers and installers of other drainage products and systems that they wick water, or pull water from the soil profile. Either these claims are made to purposefully oversell their products, or made because the manufacturers themselves don’t understand the physics of water movement. The easiest way to understand water movement is to start with the clarification that there are two types of water that we deal with in the soil.

There are various claims by manufacturers and installers of other drainage products and systems that they wick water, or pull water from the soil profile. Either these claims are made to purposefully oversell their products, or made because the manufacturers themselves don’t understand the physics of water movement.

One type is gravitational water. This is the water that moves through the soil from the force of gravity. Only this type of water can be collected by drainage systems.

The second type is water that is not affected by gravity. This is the moisture that is held onto the soil particle by the forces of capillary tension. Capillary action is the force that causes moisture to rise in soils above a water table. This water can move up or sideways in the soil as easily as it moves down, because capillary tension is a negative hydraulic force that is stronger than gravity. The strength of the force is inversely related to the size of the airspace. For instance, if two capillary tubes, one narrow and the other wider, are placed into a pail of water, water will be pulled higher into the narrower tube. The force that causes the rise in the tube above the free standing water is the result of the cohesive and adhesive properties of water. This explains why water will rise higher in a clay soil above a water table than it will in a sand profile.

The graphic below shows the range of moisture levels that we deal with in the soil. On the right hand side of the graphic is the area between wilt and field capacity. This is the moisture range where we grow grass. The closer the moisture levels are to wilt, the thinner the layer of moisture on the particle. These tension levels are measured in negative millibars. The higher the reading; the thinner the layer of moisture. When the tension becomes so high that the plant can no longer pull the moisture off of the particle, the plant begins to wilt. Going to the left on the graphic, as more moisture enters the profile, the film becomes thicker and the tension lowers to the point where it is held lightly enough that it will start to release gravitationally. This is field capacity. Field capacity occurs at around a -.55 millibars (some publications will cite this from -.80 to -.33 because of soil type). This tension area is where gravity overcomes the negative hydraulic force of capillary tension. 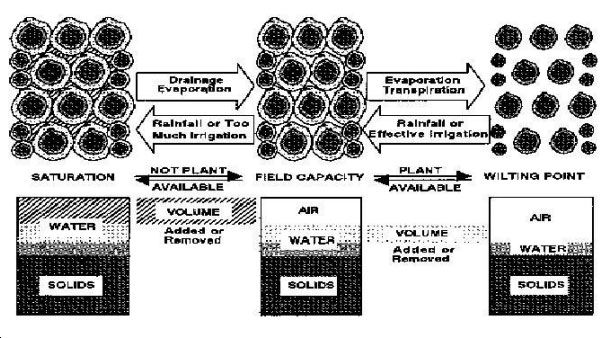 Now, back to the term wicking. Wicking describes the movement of moisture from larger to smaller particles. Drainage or permeability describes the movement of water from smaller to larger particles. For example, clay particles are smaller than sand particles, thus the voids between the clay particles are smaller than the voids between the sand particles. The larger the voids, the higher the permeability; therefore. you wouldn’t add a column of clay to drain sand, but we do add a column of sand to drain clay. Likewise, you would not worry about sand wicking moisture from clay, but a clay wall around the edges of a sand greens mix could cause drought on the perimeters.

If you had a drainage product that wicked water, it would have to have smaller capillaries than the material that was being drained.

Remember, the rise in a capillary tube is limited. Once it reaches a given height, it can’t pull anymore. So the ability of a soil to wick endlessly is impossible. If someone tells you that they have a product, method, or process that wicks drainage, you will know that this defies physics. You have only created drainage in a saturated soil when you move water from a lower to a higher permeability, with the ultimate permeability being free flow at the end of the system.