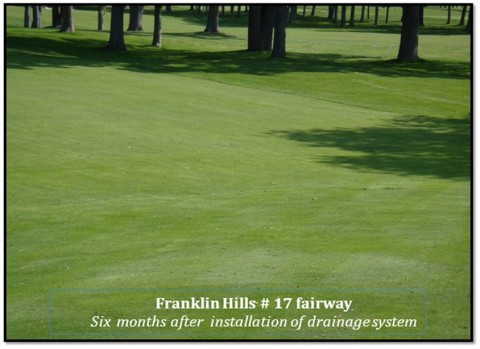 Where are the drain lines? One of the biggest challenges of any drainage project is making it look as if the project never took place. Nobody likes to see droughty drain lines for years after the completion of a project, especially not Brian Schwiehofer at Franklin Hills C.C.  in Franklin, MI (just outside of Detroit).

Anyone that has ever visited Brian’s course would vouch for his attention to detail, and 50,000 feet of visible drain lines would not have been acceptable in Brian’s world.  Any project can suffer from some wilted lines during prolonged dry stretches, particularly in the first couple of years after the completion of the project. Here at Turf Drainage Co. of America, we have witnessed millions of feet of material installed at the top courses in the country, and we have never seen a project look better than this one.  Visiting the project six months after the completion, we can honestly say that over 80% of the lines were undetectable, even to someone who knew exactly where each line was installed. Even the other 20% were so well done that the golfer would not realize there had been a drainage installation.

What is his secret? Brian’s crew used the commercial sod harvester 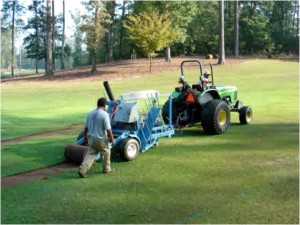 supplied by TDA to strip the sod before the contractor, Siphon Systems, Inc. out of Jupiter, Florida trenched. The sod was placed outside of the work area, and was brought back after the trenches were compacted multiple times with both large vibratory compaction wheels, as well as water packed by hand. Lastly, a plate compactor prepped the trench for Brian’s crew.  Brian says, “The key is making sure that sod goes back in the same direction, and in the same area that it came from. Secondly, the crew has to take the time to get it right the first time.”

“The key is making sure that sod goes back in the same direction, and in the same area that it came from. Secondly, the crew has to take the time to get it right the first time.”

Brian has been kind enough to let us link to the his presentation,  “Modern Drainage for a Vintage Golf Course,” which he gave at the Michigan Turfgrass conference this past winter. 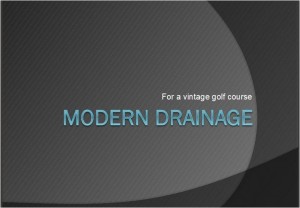