One of the most commonly asked questions we receive is, “Isn’t the filter fabric (geotextile used around Turf Drain and Perma Basins) going to clog up?” In the early 80’s, when we first introduced Turf Drain to the golf course industry, I called on golf course architect, Joe Finger in Houston. Joe was a civil engineer. As soon as I showed him the Turf Drain and explained how it worked, he said, “I have never seen a filter yet that didn’t clog up and have to be replaced.” I wasn’t able to counter his statement, but as soon as I left his office, I started my search for the explanation. Since that time, I have spent untold man-hours trying to … 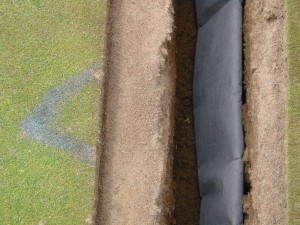 The most common technical question we are asked “Doesn’t the fabric around the drain clog up?”

The answer takes more than a simple “no” or “yes.”

Most of the misunderstanding about geotextiles comes from their original introduction into the golf course industry when they were first used as “socked pipe.” The industry installed the “socked pipe” into a bed of gravel. When failed systems were removed from the ground it was noticed that clay and silts had accumulated around the sock and the sock was blamed for the drainage failure.

In reality, the gravel had failed because it was not sized properly for the native soils. If the gravel had been the proper backfill the fines would have never reached …